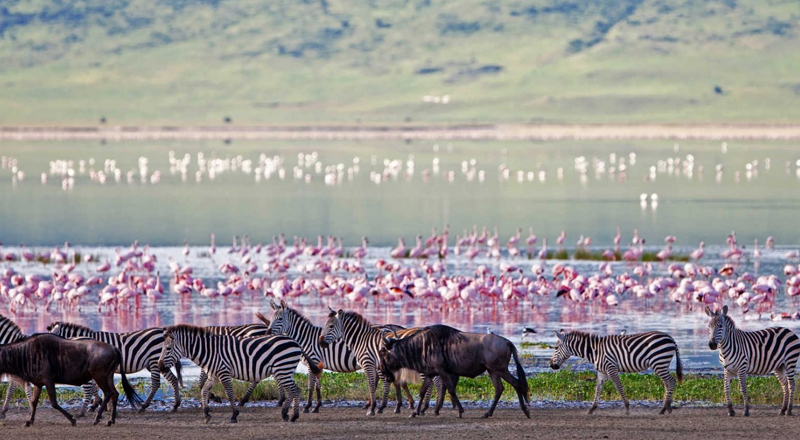 This spectacular African safari journey will take you to the Ngorongoro Crater, which boasts one of the largest concentrations of wildlife in Africa. You will witness a spectacular spectacle of African wildlife inside a self-contained environment alive with creatures. Your tour will also take you to Lake Manyara National Park, which is one of Tanzania’s most stunning wildlife locations and comprises a shallow but large soda lake at the foot of the Great Rift Valley’s western escarpment.

This African National Park is also home to three rare species of animals the Greater Kudu, the Fringed-eared Oryx, as well as a few Ashy Starlings.

After breakfast, drive to Ngorongoro Crater with lunch box, Â has full day game drive in the crater.
The Ngorongoro Crater is one of the most densely crowded African wildlife areas in the world and is home to an estimated 30,000 animals including some of Tanzaniaâ€™s last remaining black rhino.

Supported by a year-round water supply and fodder, the crater supports a vast variety of animals, which include herds of wildebeest, zebra, buffalo, eland, warthog, hippo, and giant African elephants. Another big draw card to this picturesque national park is its huge population of predators, which include lions, hyenas, jackals, cheetahs, and the ever-elusive leopard. We will enjoy a picnic lunch on the crater floor.
Dinner and overnight at Lodge / Tented Camp or Basic Public CampÂ
Meals plan: Lunch, Dinner, and Breakfast.

Early morning breakfast, then depart to Lake Manyara for game drive.
The park has varied habitat that attracts a wide variety of animals, including one of Africaâ€™s largest concentrations of elephants, Lake Manyaraâ€™s unique tree-climbing lions, zebra, buffalo, giraffe, baboons, warthog, as well as large flocks of flamingos attracted by the algae in the lake.